HIS MAJESTY KING BHUMIBOL ADULYADEJ of Thailand was born in Cambridge Massachusetts, The United States of America, on Monday the 5th of December 1927, being the third and youngest child of Their Royal Highnesses Prince and Princess Mahidol of Songkhla.

Even the facts of his birth seem to be significant in several ways. He is, first of all, the direct grandson of His Late Majesty King Chulalongkorn or Rama V who was renowned for the great reforms which he made to all institutions of Thailand to bring them up to date and in line with the rest of the Western-orientated world.

Prince Mahidol himself was perhaps one of the most modern-minded of all the sons of King Chulalongkorn and his life was dedicated to the development of many modern ideas particularly in the field of Medical Science so that he is now known as the Father of the Modern Thai Medical Profession.

Last but not least, he was given the significant name of Bhumibol Adulyadej, meaning Strength of the Land Incomparable Power which becomes prophetic as his Reign advances through various critical periods and the Thai nation evolves more and more around the Throne as the sole sources of unity and strength. 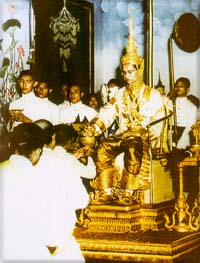 Prince Mahidol came back to Thailand and passed away when His Majesty was not yet two years old. After a brief period of primary schooling in Bangkok, His Majesty left with the rest of his family for Switzerland where he continued his secondary education at the Ecole Nouvelle de la Suisse Romande, Chailly sur Lausanne and received the Bachelieres Lettres diploma from the Gymnase Classique Cantonal of Lausanne.

He then chose to enter Lausanne University to study Science, but the death of his elder brother King Ananda Mahidol in Bangkok on the 9th. of June 1946, changed the course of his life completely, for the Law of Succession bestowed on him the arduous but challenging function of the Thai Crown. His Majesty decided to go back to Switzerland for another period of study, but this time in the subiect of Political Science and Law in order to equip himself with the proper knowledge for government. In 1950, His Majesty returned to Thailand for the Coronation Ceremony which took place on the 5th. of May.

He went back to Switzerland for another period of study before the urgent call of his country and people brought him back to Thailand in 1951 to stay.

Their Majesties were married by Her Majesty Queen Sawang Vadhana, the paternal grandmother of His Majesty, at Sra Pathum Palace in Bangkok on the 28th. of April 1950 and Their Majesties have four children namely: 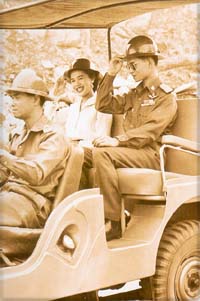 1. The Former Her Royal Highness Princess Ubol Ratana who was born on the 5th. of April 1951, in Lausanne, Switzerland and graduated form the Faculty of Science at Massachusetts Institute of Technology in The United States of America with a Bachelor of Science Degree in Bio-Chemistry in 1973. She is married to Mr. Peter Ladd Jensen and now resides in The United States of America with her husband and their three children.

2. His Royal Highness Crown Prince Maha Vajiralongkorn was born on the 28th. of July 1952, in Bangkok, Thailand, and was conferred with the title of Somdech Phra Boroma Orasadhiraj Chao Fah Maha Vajiralongkorn Sayam Makutrajakuman by His Majesty the King on the 28th. of December 1972, making him the Crown Prince or Heir to the Throne. His Royal Highness graduated from the Royal Military College Duntroon, Australia, on the 9th. of December 1975, and now serves in the Royal Thai Army, with the rank of Major General and commands the King's Own Body-Guards Regiment, the Frist Division, Royal Guards. His Royal Highness is married to Her Royal Highness Princess Soamsawali (nee Mom Luang Soamsawali Kitiyakara) and has one daughter.

4. Her Royal Highness Princess Chulabhorn was born on the 4 th. of July 1957 in Bangkok, Thailand, and graduated from the Faculty of Science and Arts at Kasetsart University with a Bachelor of Science Degree in Organic Chemistry, First Class Honours, in 1979. Her Royal Highness completed her doctorate work in organic chemistry in 1985, and received her Doctor of Philosophy Degree from Mahidol University in July of the same year.